Many times I have been asked if parasites are viruses or bacteria, and the fact is that they are neither one nor the other, but they could be both. The fact is that there are species of bacteria, as well as animals, plants and fungi that are parasites, just like viruses. Parasitism is a relationship between two species in which one acts as a parasite getting a benefit, and the other as a host, being parasitized. The host is the one harmed in this relationship, being sometimes affected in such a severe way that it could even end up dying.

Many other times I have wondered why so many people are asking the same question. Perhaps it is because parasitic diseases, although very numerous and varied, do not affect humans very frequently in our environment, the European continent. Parasitic diseases are those caused by protozoa (unicellular organisms) or helminths (worms), both endoparasites, or caused by ectoparasites (mites, ticks, etc.), being the latter located on the surface of the host. Parasitism is considered to be the most frequent lifestyle on the planet. The number of parasite species is enormous and very diverse, and their origin is still being debated from an evolutionary point of view.

Parasitology is a branch of biology that hosts many other disciplines such as immunology, molecular biology, ecology, veterinary medicine, epidemiology, genetics, etc., as there are many aspects to analyze in this type of relationships. One concept not yet studied in depth is the role of parasites in ecosystems. The most studied are those that affect human beings: “worms” or those ones that,  in spite of being microscopic, have a high incidence in tropical zones mainly, such as malaria, schistosomiasis, leishmaniasis, Chagas disease or sleeping sickness for example, as well as those that cause significant economic losses affecting livestock or crops. Table including the neglected tropical diseases included in the WHO list for the year 2017 where various parasitic diseases can be observed.

Considering the large number and diversity of species and parasitic relationships, it can be said that parasitism is undoubtedly a successful strategy. Although the consequences of parasitism on the host can be highly diverse, this success is often defined by the parasite’s ability to invade the host in a stealthy way – being unnoticed means that you can stay there quietly without “stressing” to look for a new home. Many stealth strategies go through evading the immune system, as is the case of the protozoan parasite Toxoplasma gondii, which affects a large number of animal species, including humans, causing toxoplasmosis. The truth is that for a long time it was thought that toxoplasmosis was practically harmless in patients with a well-developed and competent immune system and only caused severe damage and even death in immunosuppressed people and fetuses. However, there are still many unanswered questions about both the infectious process and the effects of infection. T. gondii has frequently been used as a model for the study of other parasitic diseases caused by organisms of the same group, called Apicomplexa, as is the case of Plasmodium, the causing agent of malaria; however, the mechanisms involved in the development and adaptation to parasitic life in toxoplasmosis are no less interesting.

Like a ninja, the protozoan T. gondii invades the cell without making much “noise”. Once inside, it resides inside a specialized organelle, a vacuole that serves as camouflage to avoid its elimination.

However, the fact of being protected inside this vacuole does not prevent its ability to obtain nutrients from the host, moreover, the parasite is capable of recruiting organelles from the host cell to the vicinity of this vacuole to make the cell’s assortment of nutrients available in a comfortable way. In this way, it can use the energy of the host for multiplication, until its complete destruction. During infection, a reorganization of the cell organelles of the host cell may be observed.

Simplified illustration of two human cells, one healthy and the other one infected with Toxoplasma gondii. The latter shows the reorganization of the organelles of the host cell around the parasite cell.

Nevertheless, T. gondii does not always divide so actively. There is a slow form of replication that occurs especially in infections in the brain and muscle, in which cysts are formed, which are not recognized by the immune system and the infection can remain in a latent status. A large part of the human population is considered infected through the consumption of contaminated, raw or undercooked meat, poorly washed vegetables or contact with faeces from the ultimate host of the parasite: the cat, in which sexual reproduction takes place. Although the consequences of latent infection are not known with certainty, there are some studies in rodents that mention the existence of a behavioural change in affected individuals, as if a process of conversion into “zombies” took place, acquiring a more daring personality. However, the exact causes of this reported behaviour are not known, nor is this hypothesis completely accepted by the scientific community yet, although there are more and more studies coming up about its relationship with different neurological disorders[6],[7],[8]. Truly, this is a subject as attractive as it is controversial and it would be very interesting to find the answer. 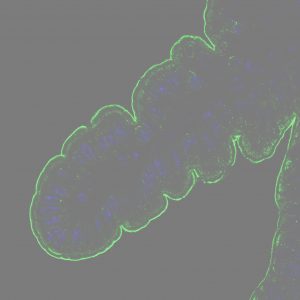 What happens when the brain carers fall ill?