Central nervous system is composed by a huge number of highly connected cells known as neurons. Their contact points are extremely interesting communication zones. But neurons do not use words to talk to each other. They send their messages through small electrical impulses and chemical substances. These chemicals substances, known as neurotransmitters, are packaged inside neurons in small spheres called vesicles that travel to the surface of the cells, where they fuse with the membrane resulting in the release of the neurotransmitter outside cell in order to arrive to other cells. This biological process is called neurosecretion.

But, how is this vesicle trafficking in the cell controlled? How do these vesicles find the right way to the cell surface? Well, secretory cells have a skeleton which makes sure vesicles are in the proper place and at the right time for secretion events. Cells´ skeleton is built by three different elements: microtubules, intermediate filaments and the thinnest of them: F-actin microfilaments. Last one builds the F-actin skeleton and this structure is key for vesicles trafficking and vesicles organization near active zones for secretion. For this reason, when it fails, secretory disorders could appear including fails in neurosecretion and neuronal communication consequently. There are evidences linking these defects in amyotrophic lateral sclerosis (ALS) disease, Autism or Autism Spectrum Disorder (ASD) or Alzheimer.

Taking into account the health relevance of F-actin cytoskeleton it is really important that we fully understand how the F-actin microfilaments work and what its role is in vesicle trafficking. In order to do this, researchers have been using another type of cells located in the adrenal gland called chromaffin cells. These cells are an excellent and highly accepted model to study neurotransmitters release because they are close to neurons by sharing embryological origin and neurosecretion function in response to stimulus. Moreover, chromaffin cells´ vesicles are bigger than neurons´ vesicles, offering an advantage to study them and “the machinery” involved in vesicles trafficking, organization and fusion.

Our functional interpretation for F-actin cytoskeleton shows a clear evolution over the years thanks to study this structure in live cells under stimulation conditions to promote cell secretion in vitro and interpret the structural response to this stimulus linked to secretion events making easier by BioImaging revolution with high resolution microscopy. Early studies in fixed cells (dead cells) described the spatial distribution of F-actin inside chromaffin cells as a dense and continuous network under the cell membrane, which was defined as barrier system to retain vesicles, blocking vesicles fusion and also neurotransmitters release. However, years after, studies were developed in live cells under physiological stimulus and this “barrier concept” disappeared because F-actin cytoskeleton showed a remodeling capacity changing fibbers´ position and orientation and internal cavities dimensions.

In this way, F-actin cytoskeleton is a dynamic structure. F-actin network adopts an open structure, in response to stimulus, with wide and connected cavities creating open pathways for vesicles trafficking. These open pathways allow vesicles movement to the cell surface for their later fusion with the cell´s membrane. After that, F-actin cytoskeleton will be recharge with more vesicles. When the stimulus ends, this structure recovers a close scheme, holding all these vesicles inside closed cavities with limited mobility until new communication events.

The role of the F-actin cytoskeleton goes beyond the vesicles trafficking. It is also essential to organize and transport other key elements in communication such as mitochondria, the energy factory for cells, essential for cellular biological processes development. Recently, it has been described that F-actin cytoskeleton can develop local movements offering guided transport for mitochondria and vesicles at specific points. The most interesting part is that mitochondria and vesicles can move to specific parts in the cell membrane designed for the neurotransmitters release (active zones for secretion). On the one hand, vesicles location near active zones offers a functional configuration for fusion events. On the other, mitochondria population can appear near active zones creating a proper ionic environment (high level of calcium) essential for fusion machinery activation and neurosecretion release development.

Taking all together, the F-actin cytoskeleton acts as an excellent “active” organizer, controlling vesicle and mitochondria transport and organizing in a functional way their location becoming essential for neurotransmitters release. In this way, F-Actin cytoskeleton structural disruption or dynamics blocking could develop neurocommunication disorders. 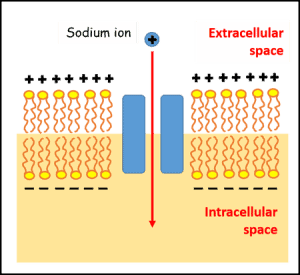